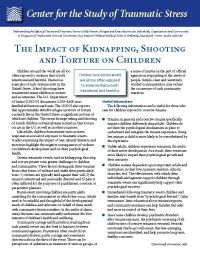 The Impact of Kidnapping, Shooting and Torture on Children

Children around the world are all too often exposed to violence that is both intentional and harmful. Numerous examples of such violence exist in the United States. School shootings have traumatized many children as victims and as witnesses. The U.S. Department of Justice (USDOJ) documents 3,200–4,600 non- familial abductions each year. The USDOJ also reports that approximately 400,000 refugee survivors of torture currently live in the United States, a significant portion of which are children.