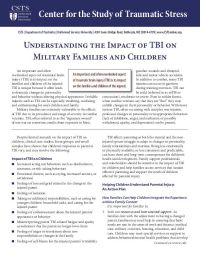 Resources for Recovery: Impact of TBI on Military Families and Children (Family Sheet)

An important and often overlooked aspect of traumatic brain injury (TBI) is its impact on the families and children of the injured. TBI is unique because it often leads to dramatic changes in personality and behavior without altering physical appearance. Invisible injuries such as TBI can be especially troubling, confusing and embarrassing for one’s children and family.

Military families are extremely vulnerable to the effects of TBI due to its prevalence and range of severity in combat veterans. TBI, often referred to as the “signature wound” of our war on terrorism, results from exposure to blast, gunshot wounds and shrapnel, falls and motor vehicle accidents. In addition to combat, many TBI injuries can occur in garrison during training exercises. TBI can be mild (referred to as mTBI or concussion), moderate or severe. Even in milder forms, when combat veterans say that they are “fine” they may exhibit changes in their personality or behavior. With more serious TBI, often occurring with complex war injuries, profound changes in personality or inappropriate behaviors (lack of inhibition, anger, and outbursts, or possibly withdrawal, apathy, and depression) can be present.