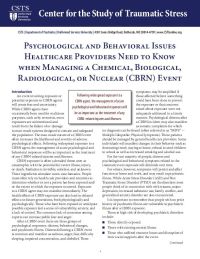 An event involving exposure or potential exposure to CBRN agents will create fear and uncertainty. While CBRN agents have occasionally been used for malicious purposes, such as by terrorists, most exposures are unintentional and result from the failure of or damage to man-made systems designed to contain and safeguard the population. The man-made nature of a CBRN event often increases the likelihood and severity of adverse
psychological effects. Following widespread exposure to a CBRN agent, the management of acute psychological and behavioral responses will be as important as the treatment of any CBRN-related injuries and illnesses. CBRN exposure is often a dreaded threat