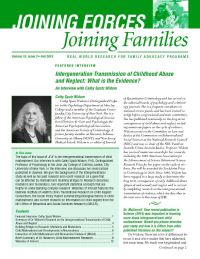 Intergeneration Transmission of Childhood Abuse and Neglect: What is the Evidence

Cathy Spatz Widom is Distinguished Professor in the Psychology Department at John Jay College and a member of the Graduate Center faculty, City University of New York. She is a fellow of the American Psychological Association (Division 41–Law and Psychology), the American Psychopathological Association, and the American Society of Criminology. A former faculty member at Harvard, Indiana, University at Albany (SUNY), and New Jersey Medical School, Widom is co-editor of Journal of Quantitative Criminology and has served on the editorial boards of psychology and criminology journals. She is a frequent consultant on national review panels and has been invited to testify before congressional and state committees. She has published extensively on the long-term consequences of child abuse and neglect, including numerous papers on the cycle of violence. Widom served on the Committee on Law and Justice at the Commission on Behavioral and Social Sciences at the National Research Council (NRC) and was co-chair of the NRC Panel on Juvenile Crime, Juvenile Justice. Professor Widom has received numerous awards for her research, including the 1989 American Association for the Advancement of Science Behavioral Science Research Prize for her paper on the cycle of violence. She will be awarded the Stockholm Prize in Criminology in 2016. Since 1986, Widom has been engaged in a large study to determine the long term consequences of early childhood abuse (physical and sexual) and neglect and is currently completing research on the intergenerational transmission of violence, which she describes in the interview in this issue of JFJF.