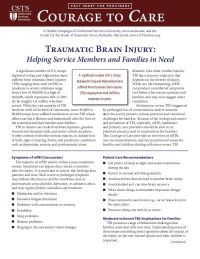 A significant number of U.S. troops deployed to Iraq and Afghanistan have suffered from traumatic brain injuries (TBI) ranging from mild (mTBI) to moderate to severe. Estimates range from a low of 180,000 to a high of 360,000, which represents 10% to 20% of the roughly 1.8 million who have served. While the vast majority of TBI has been mild in the form of concussion, some 45,000 to 90,000 troops have suffered moderate to severe TBI whose effects can last a lifetime and dramatically alter the lives of the wounded, their families and children.