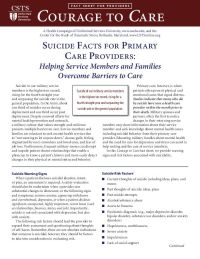 Suicide of our military service members is the highest on record, rising for a fourth straight year and surpassing the suicide rate in the general population. In the Army, about one third of suicides occur during deployment and one third occur post deployment. Despite stepped up efforts for mental health prevention and outreach, a military culture that values strength and resilience presents multiple barriers to care.