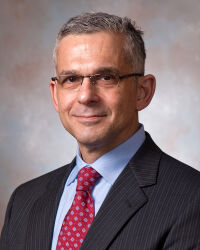 Center for the Study of Traumatic Stress

Stephen J. Cozza, MD is Professor of Psychiatry and Pediatrics at the Uniformed Services University where he serves as Associate Director, Center for the Study of Traumatic Stress (CSTS) and is responsible for the Child and Family Program. He is a graduate of the United States Military Academy at West Point, New York. He received his medical degree from the George Washington University School of Medicine and Health Sciences. He completed his residency in General Psychiatry and fellowship in Child and Adolescent Psychiatry at Walter Reed Army Medical Center in Washington, DC. Dr. Cozza is a diplomate of the American Board of Psychiatry and Neurology in the specialties of General Psychiatry and Child and Adolescent Psychiatry. He has served in a variety of positions of responsibility in the Department of Psychiatry at Walter Reed Army Medical Center to include Chief, Child and Adolescent Psychiatry Service, Program Director of the Child and Adolescent Psychiatry Fellowship Program and Chief, Department of Psychiatry. He retired from the U.S. Army in 2006 after 25 years of military service. Dr. Cozza’s professional interests have been in the areas of clinical and community response to trauma in both military and civilian communities, including the impact of deployment and combat injury, illness and death on military service members, their families and their children. Dr. Cozza has highlighted the impact of deployment, injury, illness and death on the children and families of military service members. He has also examined the risk for prolonged grief disorder, a unique grief-related clinical condition, in families affected by sudden and violent deaths, including those bereaved due to combat, suicide, homicide, accident, and terrorism. He is published in the scientific literature and has presented on these topics at multiple national and international scientific meetings. Dr. Cozza serves as a scientific advisor to several national organizations that focus on the needs of military children and families.

Please see ResearchGate for a list of Dr. Cozza’s publications.