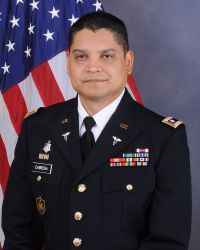 Lieutenant Colonel Cabrera has deployed to Iraq and Afghanistan as a member of the Army’s Mental Health Advisory Teams (MHATs), chartered by the Office of the Surgeon General to assess the behavioral health of the deployed Force and develop recommendations for optimal distribution of behavioral health assets in Theater. He has made multiple contributions to the Army and to the scientific community via participation in large-scale military epidemiological studies, as well as publication of peer-reviewed manuscripts focused on psychological health and resilience. Lieutenant Colonel Cabrera is a certified Medical Acquisition Officer, holding the 8X Additional Skill Identifier (ASI), and is a member of the Army Acquisition Corps. His awards include the Meritorious Service Medal with 4 Oak Leaf Clusters, the Army Commendation Medal, the Army Achievement Medal, the Afghanistan Campaign Medal, and the Iraq Campaign Medal.

Lieutenant Colonel Cabrera is married and has two sons.