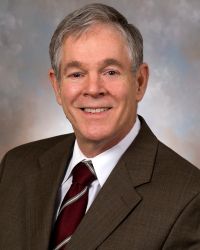 Dr. Howe received his undergraduate degree at Yale and his MD at Columbia. He completed an internship at Harlem Hospital and his residency in Psychiatry at Walter Reed Army Medical Center. He attended Rutgers University Law School and then received his law degree at Catholic University. Dr. Howe joined the USU faculty in 1977 and is a Professor in the Department of Psychiatry, Professor in the Department of Medicine, Director of Programs in Medical Ethics, and Senior Scientist, Center for the study of Traumatic Stress, at the Uniformed Services University in Bethesda, Maryland. His research has focused on medical ethics with an emphasis on ethics in military medicine and clinical care at the end of life.

Dr. Howe’s professional contributions stem primarily from his interests in ethics. He has been the Editor-in-Chief of The Journal of Clinical Ethics since its inception and has served as a member of the Walter Reed Army Medical Center, National Naval Medical Center, and Malcolm Grow U.S. Air Force Medical Center Ethics Committees, as well as the Ethics Committees at Montgomery Hospice, the Visiting Nurse Association, Springfield Psychiatric Hospital, the V.A. Hospital of Washington, DC, and the National Institutes of Health. He is Chair of the human use Institutional Review Board at USU and has chaired the Ethics Subcommittee of the Society of Medical Consultants to the Armed Forces, and has served on NIH and WRAIR IRB’s.

Dr. Howe is past Chair of International Health Law Committee of the International Law Section of the American Bar Association, a past appointee to the Governor’s Commission of Health Care Policy and Financing for the State of Maryland, and past Liaison Member of the International Section of the American Bar Association and the Commission on Mental and Physical Disability Law. He has been a consultant at NIH, OTA, HHS, FDA, the Institute of Medicine, the US Public Health Service, the National Science Foundation and NASA. He has been a member of the CIA IRB, the American Red Cross IRB, an NIH IRB, and other IRB’s. He is on the Editorial Board and/or a reviewer for numerous publications, including NEJM and JAMA. He is a past President of the Academy of Medicine in Washington, DC.

Visit ResearchGate for a list of Dr. Howe’s publications.