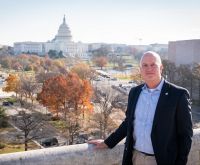 Ronald J. Whalen, Ph.D., MSW is the Senior Research Social Worker for the Family Violence and Trauma Project, within the Department of Psychiatry’s Center for the Study of Traumatic Stress.  Dr. Whalen originally hails from Big Rapids, Michigan, where he enlisted in the U.S. Army in 1981 during his senior year of high school.  After serving 4 years as a Combat Medic and Operating Room Technician (1982-1986), Dr. Whalen attended Central Michigan University where he received his B.S. degree in 1990, followed immediately by an MSW degree from the University of Michigan in 1991.

While subsequently serving in Nepal as a Peace Corps Volunteer (1992-94), Dr. Whalen received recruitment literature from the U.S. Army encouraging him to accept a direct commission as a Social Work Officer.  Beginning in 1996, Dr. Whalen served over 21 years as Social Work Officer, earning the rank of Lieutenant Colonel before retiring from the Army in 2018.  Prior to the terrorist attacks of 9/11, Dr. Whalen’s clinical focus was on the prevention and treatment of family violence.  Following the 9/11 terrorist attacks, Dr. Whalen’s clinical duties shifted to Operational Medicine where he served multiple tours in Iraq as the Brigade Behavioral Health Officer for 1st Brigade, 3rd Infantry Division, [Operation Iraqi Freedom (OIF) Invasion Force, 2003; OIF III (2005)].  Upon return from Iraq in 2006, Dr. Whalen learned he was competitively selected to complete doctoral studies in social work.  From 2007-2010, Dr. Whalen attended the University of South Carolina’s social work doctoral program, and subsequently was assigned to the Walter Reed Army Institute of Research (WRAIR) from 2010-2014.  Immediately following a successful defense of his dissertation in 2011, Dr. Whalen deployed to Afghanistan (2011-2012) in support of Operation Enduring Freedom where he served as a Behavioral Health Officer with the 528th Combat Stress Detachment.  Dr. Whalen returned to Afghanistan in the summer of 2013 as member of a Mental Health Advisory Team (MHAT-9) tasked with assessing the psychological wellbeing of combat soldiers serving in Afghanistan. Dr. Whalen’s final duty assignment was at the Uniformed Services University, where he served as an assistant professor within the Department of Family Medicine, F. Edward Hebert School of Medicine, Uniformed Services University.